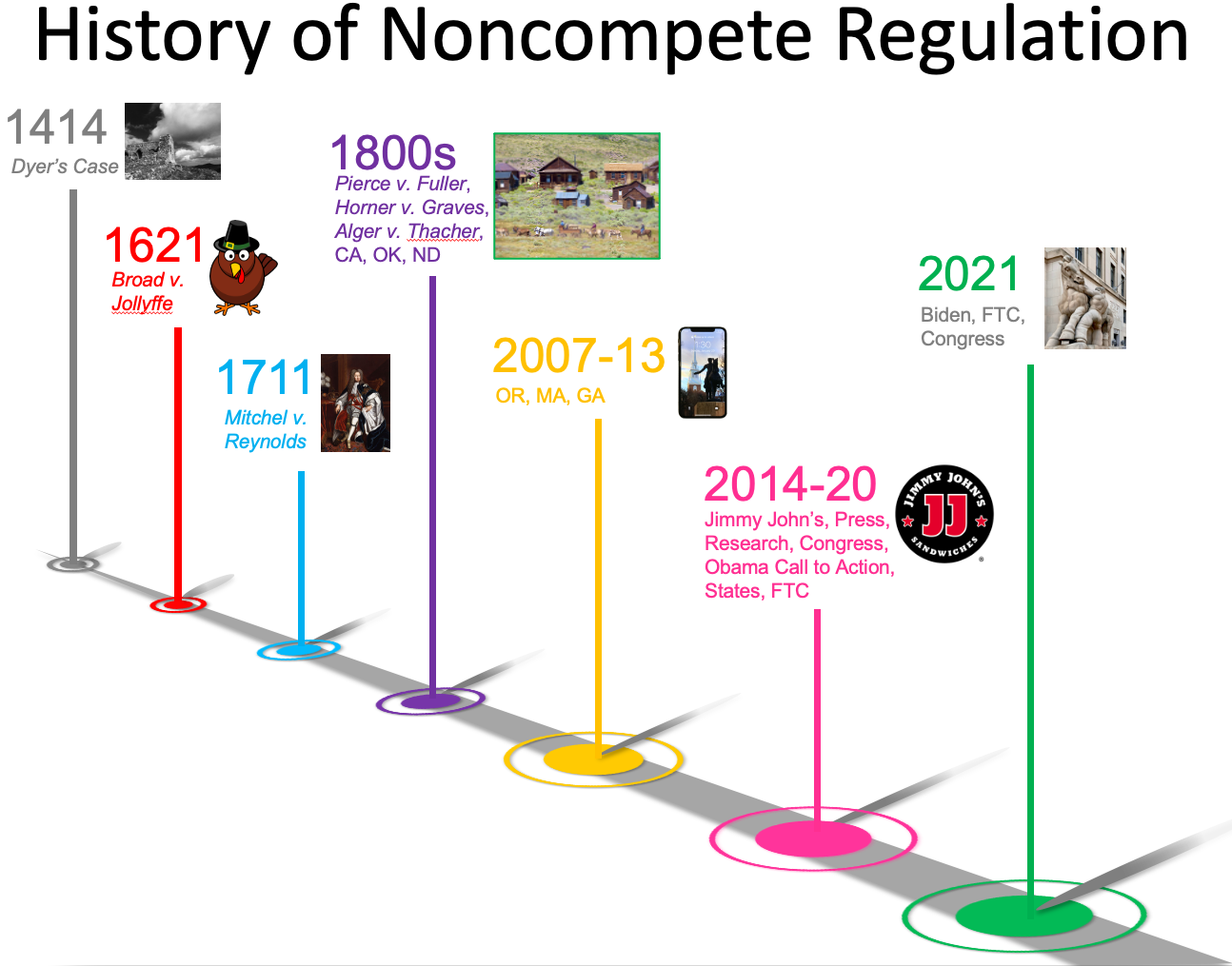 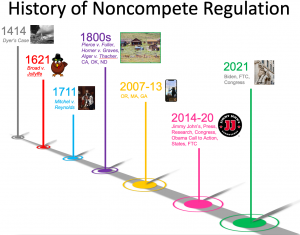 As we look at recent developments in noncompete regulatory efforts at the state and federal levels, it’s good to have a quick reminder of how we got here.

The image on the right (click on it to expand) is from a slide deck presentation of mine on the history of noncompete regulation.

Noncompetes Have Been Around Since the Middle Ages

The first known case involving a noncompete — Dyer’s Case — took place in 1414. Apparently, in that case, an apprentice named John Dyer had promised to refrain from his trade for six months in the town he had been trained in. The master tradesman sought to enforce the restriction, though he didn’t show up for the hearing. In response, the judge refused to enforce the noncompete and reportedly said, “Per Dieusi le plaintiff fuit icy il irra al prison, tanque il ust fait fyne au Roye.’ (‘By God, if the plaintiff were here he would go to prison until he paid a fine to the King.’).” See Catherine L. Fisk, “Working Knowledge: Trade Secrets, Restrictive Covenants in Employment, and the Rise of Corporate Intellectual Property, 1800–1920,” 52 Hastings L.J. 441, 455 n.33 (2001).

Exceptions to a Ban Start to Emerge Along with Thanksgiving

The tides of noncompete enforcement turned by 1621 (the year of America’s first Thanksgiving), when a noncompete that was limited in geographic scope was enforced in Broad v. Jollyffe. See Alger v. Thacher, 36 Mass. 51, 53 (1837).

The Modern Standard Emerges with King George the First

Almost 100 years later, the exception became the rule with the 1711 watershed case of Mitchel v. Reynolds, 24 Eng. Rep. 347 (Q.B. 1711), which established the modern framework for the analysis of the enforceability of noncompetition agreements. See Fisk at 453–54; Alger v. Thacher, 36 Mass. at 53. In Mitchel, for the first time, a court distinguished between “contracts in restraint of trade generally,” which were considered void, and “those limited as to time or place or persons,” which “have been regarded as valid and duly enforced.” Alger v. Thacher, 36 Mass. at 53. Although involving the sale of a bakery business, the Mitchel court’s thorough analytical approach “shaped the nineteenth-century courts’ approach to the issue in . . . employment relationships.” Fisk at 454–55.

The first careful reformulation of the “reasonableness” test came in an English case decided in 1831. In Horner v. Graves [131 Eng. Rep. 284 (C.P. 1831)], Tindal, C.J., clarified Mitchel v. Reynolds by ruling that the element of reasonableness was not limited to the consideration stated in the contract but extended to all facts relevant to “whether the restraint is such only as to afford a fair protection to the interests of the party in favour of whom it is given, and not so large as to interfere with the interests of the public.” [131 Eng. Rep. at 287.]

For the 200-plus-year period that noncompetes have been regulated in the United States (i.e., since at least as early as 1811), noncompetes have been the province of state regulation, and all fifty states have made policy decisions that make sense for their citizens and their economies. Forty-seven states permit noncompetes to be used, albeit to a greater or lesser extent, as determined to be necessary to protect companies from certain types of unfair competition.

Only three states ban employee noncompetes: California (since 1872, see Edwards v. Arthur Andersen LLP, 44 Cal. 4th 937, 945 (2008)); North Dakota (since 1865—before North Dakota was even a state, see Werlinger v. Mut. Serv. Cas. Ins. Co., 496 N.W.2d 26 (N.D. 1993)); and Oklahoma (since 1890—before Oklahoma was a state, see Brandon Kemp, “Noncompetes in Oklahoma Mergers and Acquisitions,” 88 Okla. B.J. 128, 128 (2017)). Contrary to frequent confusion, although Montana has language similar to the other three states, that language has been interpreted, at least since 1985, to not ban employee noncompete agreements. See Montana allows noncompetes! (Only California, Oklahoma, and North Dakota don’t.). Similarly, although Michigan once had a ban (enacted in 1905 with similar language), the ban was repealed effective as of 1985.

While noncompete laws continued to evolve over time, more recently (specifically, between 2007 and 2013) states started to reevaluate their noncompete laws in several notable ways, ultimately triggering additional states to start reevaluating their laws.

Specifically, in 2007 (the year the first iPhone was released), Oregon made the first of several significant (groundbreaking) changes to its noncompete law, including a requirement of advance notice to the employee that a noncompete will be required, a minimum compensation threshold, and the ability to use noncompetes for employees below the wage threshold (and certain others) by paying them a specified amount during the noncompete period. (These changes became effective in 2008.)

Then, in 2009, Massachusetts began a decade-long process to update its noncompete law, which started with two bills that were filed (nearly simultaneously) — one to ban all employee noncompetes and the other to modify the law (based initially on what Oregon had done).

Starting about that same time, Georgia embarked on changes to its noncompete law, including the use of a state-wide referendum, to make it easier to enforce noncompetes in Georgia.

The Massachusetts and Georgia initiatives received considerable press, which when coupled with some other issues making the news (see below), ultimately culminated in most other states following suit in a state-by-state review process that continues through today.

In total, over the past several years, 37 states have been reevaluating their noncompete laws, 24 of which have made changes — including California, which, effective January 1, 2017, actually made its ban somewhat less prohibitory through its adoption of Labor Code § 925.

And, just this year alone, there were 66 noncompete bills pending in 25 states,1 three of which have been enacted (one in each of Illinois, Oregon, and Nevada) — plus a new law in D.C. to ban most noncompetes, and a bill to rein in D.C’s new law before it becomes effective (which is anticipated to be in April 2022).

Instructively, while many of the states have considered banning noncompete, not a single state has done so. Rather, each state has evaluated the diverse needs of its workforce and industries, and reached a balance of interests that it determined appropriate for its population. For example, in 2015, Hawaii banned the use of noncompetes for workers in the technology field (as part of a broader effort to attract technology companies). No other state has followed its lead, though D.C. has come close.

The Feds Start to Look at Regulation

In 2014, a sandwich chain called Jimmy John’s made the news and created a firestorm when it was revealed to have been requiring its sandwich makers to sign noncompetes. That use of noncompetes resulted in the state attorneys general in Illinois and New York each pursuing and ultimately settling with Jimmy John’s (see Illinois here and New York here), and pursuing other similar abuses.

The headline-making abuse of noncompetes reflected by the Jimmy John’s matter and some others at the time, coupled with the developing academic research and the Georgia and Massachusetts legislative developments, prompted federal legislative efforts in 2015 (as well as increased state-by-state review).

The first federal bill was the “Mobility and Opportunity for Vulnerable Employees Act” (or “MOVE Act”), filed by Senator Chris Murphy (D-CT) and co-sponsored by then-Senator Franken and Senators Elizabeth Warren (D-MA), Richard Blumenthal (D-CT), and Sheldon Whitehouse (D-RI). That bill sought to prohibit the use of noncompetes for “low-wage employees.”

At about the same time, two other bills were filed: the “Limiting the Ability to Demand Detrimental Employment Restrictions Act,” which was very similar to the MOVE Act, and the “Freedom for Workers to Seek Opportunity Act,” which sought to ban the use of noncompetes for grocery store workers (only). None of these bills passed.

In 2016, the Obama Administration (through the US. Department of Treasury and the White House) issued two reports investigating the use and impacts of noncompetes: Non-compete Contracts: Economic Effects and Policy Implications and Non-Compete Agreements: Analysis of the Usage, Potential Issues, and State Responses, respectively, both finding overuse and misuse of noncompete agreements. Following those reports, the White House convened a small working group (of which I was a part) to discuss the issues, ultimately resulting in a report entitled, “Non-Compete Reform: A Policymaker’s Guide to State Policies,” and the issuance of a Call to Action, suggesting recommended practices for state regulation of noncompetes.

In January 2019, Florida Senator Marco Rubio introduced the “Freedom to Compete Act” to amend the Fair Labor Standards Act of 1938 (29 U.S.C. 201, et seq.) to ban noncompetes for most nonexempt workers. And, in October 2019, Senator Chris Murphy (D-CT) and Senator Todd Young (R-IN) refiled the Workforce Mobility Act to ban the use of virtually all employee noncompete agreements. Neither of these bills passed.

In January 2020, following the urging from certain members of Congress, the FTC began looking into the propriety of regulating noncompetes. Accordingly, on January 9, 2020, the FTC conducted a Workshop, “Non-Compete Clauses in the Workplace: Examining Antitrust and Consumer Protection Issues.” Following that workshop, the FTC received 328 submissions answering several questions that the FTC had posed. Those submissions (including one that I and 22 others collectively submitted) provided myriad varied perspectives, ranging from strong support for the FTC to claim authority and ban noncompetes to strong support to leave the regulation to the states.

On July 22, 2020, Senators Elizabeth Warren and Chris Murphy sent a letter to the FTC asking the FTC what actions it has taken to regulate noncompetes, and requesting a response by August 4, 2020. No public response was provided.

In December 2020, President Biden announced, as part of his platform, the following plan with respect to noncompetes:

Eliminate non-compete clauses and no-poaching agreements that hinder the ability of employees to seek higher wages, better benefits, and working conditions by changing employers. In the American economy, companies compete. Workers should be able to compete, too. But at some point in their careers, 40% of American workers have been subject to non-compete clauses. If workers had the freedom to move to another job, they could expect to earn 5% to 10% more – that’s an additional $2,000 to $4,000 for a worker earning $40,000 each year. These employer-driven barriers to competition are even imposed within the same company’s franchisee networks. For example, large franchisors like Jiffy Lube have no-poaching policies preventing any of their franchisees from hiring workers from another franchisee. As president, Biden will work with Congress to eliminate all non-compete agreements, except the very few that are absolutely necessary to protect a narrowly defined category of trade secrets, and outright ban all no-poaching agreements.

On July 9, 2021, President Biden issued an Executive Order on Promoting Competition in the American Economy “encourag[ing the FTC Chair] to consider working with the rest of the Commission to exercise the FTC’s statutory rulemaking authority under the Federal Trade Commission Act to curtail the unfair use of non-compete clauses and other clauses or agreements that may unfairly limit worker mobility.”

As will be discussed in the next post, that same day, Federal Trade Commission Commissioner Christine Wilson submitted written testimony to the House Judiciary Committee Subcommittee on Antitrust, Commercial and Administrative Law, discussing “monopsony and labor issues” and “address[ing] antitrust enforcement and proposals that impact labor markets, including occupational licensing, monopsony, and non-compete and no-poach agreements.”

In the meantime, if the summary above wasn’t enough for you, you can read a more detailed background of the federal efforts (including details about Congressional hearings and my written testimony to the United States Senate Committee on Small Business and Entrepreneurship Hearing on “Noncompete Agreements and American Workers”) at Federal Noncompete Initiatives: When you can’t convince the states, ask the feds. And, remember, if you want to see a summary of the current noncompete law in any state (and D.C.), please refer to our 50-state noncompete chart, which has been updated on a continual basis since 2010, as the laws change.