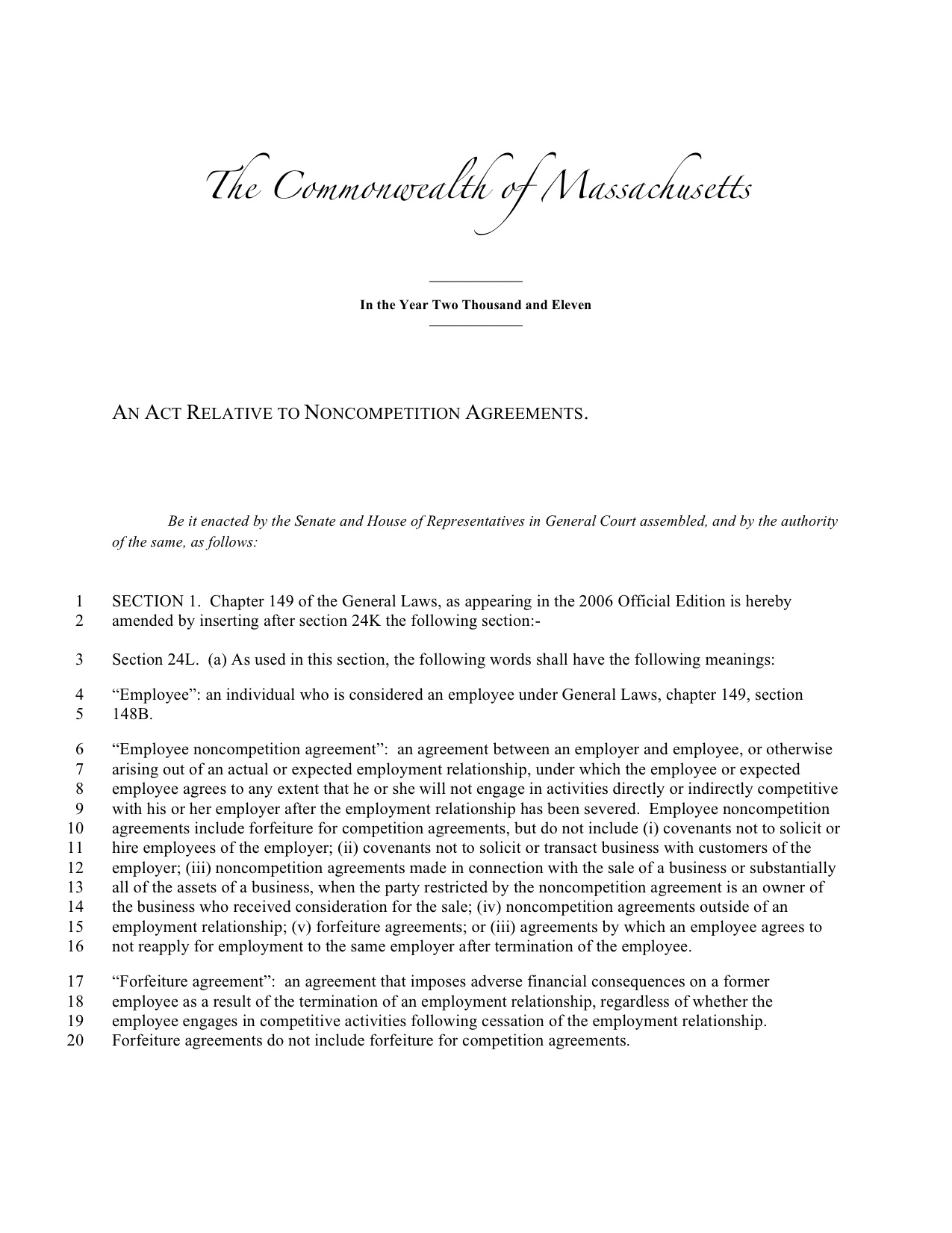 The bill in Massachusetts to codify, clarify, and modernize Massachusetts law relative to employee noncompetition agreements was re-filed today, with several significant changes from the prior version.  A copy will be available shortly (check back or see below).

Here is a summary:

(1) The bill, if enacted, will not apply retroactively (i.e., it would apply only to noncompete agreements that are entered into after the law becomes effective). Of course, lawyers being lawyers, will not let the inquiry end there. Lawyers seeking to help their clients avoid existing noncompete agreements will likely argue that the bill provides guidance that should be followed in interpreting existing agreements.

(2) The bill does not affect nondisclosure agreements, nonsolicitation agreements, anti-piracy agreements, other similar restrictive covenants, or noncompetition agreements outside of the employment context (for example, in the context of the sale of a business). Such agreements are specifically exempted from the scope of the bill.

(3) The bill codifies current law insofar as noncompetition agreements may be enforced if, among other things, they are reasonable in duration, geographic reach, and scope of proscribed activities and necessary to protect the employer’s trade secrets, other confidential information, or goodwill. Similarly, courts may continue to reform noncompetition agreements to make them enforceable and refuse to enforce such agreements in certain circumstances.

(4) The bill requires that noncompetes be in writing, signed by both parties, and, in most circumstances (i.e., if reasonably feasible), provided to the employee seven business days in advance of employment. If the agreement is required after employment starts, the employee must be provided with notice and “fair and reasonable” consideration (beyond just continued employment).

(5) The bill restricts noncompete agreements to one year, except in the case of garden leave clauses, which may be up to two years.

(6) The bill identifies certain restrictions that will be presumptively reasonable and therefore enforceable (if all other requirements are met).

(7) The bill requires payment of the employee’s legal fees under certain circumstances, primarily where the agreement is not enforced in most respects by the court or where the employer acted in bad faith. The bill does, however, provide safe harbors for employers to avoid the prospect of having to pay the employee’s legal fees, specifically, if the noncompete is no more restrictive than the presumptively reasonable restrictions (the safe harbors) set forth in the bill – or if the employer objectively reasonably tried to fit within the safe harbors. Similarly, an employer may receive its legal fees, but only if otherwise permitted by statute or contract, the agreement falls within the safe harbor, the noncompete was enforced, and the employee acted in bad faith.

(8) The bill rejects the inevitable disclosure doctrine (a doctrine by which a court can stop an employee from working for a competitor of the former employer even in the absence of a noncompetition agreement).

(9) The bill places limitations on forfeiture agreements (agreements that can otherwise be used as de facto noncompetition agreements).

The principal changes from the last bill are as follows:

(1) The requirement that a noncompete be housed in a separate document has been eliminated.

(2) The salary threshold has been eliminated. Instead, courts shall simply factor in the economic circumstances of, and economic impact on, the employee.

(3) Garden leave clauses have been added back in. Accordingly, if an employer needs a noncompete for more than one year, up to two years, it may – at its option – use a garden leave clause.

(4) The consideration for a mid-employment noncompete has been changed to simply that which is “fair and reasonable.” The presumption that 10 percent of the employee’s compensation is “reasonably adequate” (the old standard) has been eliminated.

(5) The circumstances in which an employer can avoid paying mandatory attorneys’ fees have been expanded to include when the lawyer objectively reasonably attempted (even if unsuccessfully) to fit within the applicable safe harbors.

(6) The rejection of the inevitable disclosure doctrine has been further clarified to ensure that employers can still protect themselves if an employee has disclosed, threatens to disclose, or is likely intentionally disclose the employer’s confidential information.

(7) The scope of restrictions place on forfeiture agreements has been limited. Incentive stock option plans and similar plans will have fewer requirements placed on them.

Some people have expressed an interest in having other issues to be addressed by the bill, which have not been incorporated. Three facts are important in this regard: (1) additional changes may be made in the future; (2) the bill is the product of input reflecting many different points of view and strives to balance those needs in order to improve the state of the law as to all of those affected; and (3) the bill is not, nor is it intended to be, a substitute for proper drafting of a noncompete (or any other restrictive covenant, for that matter).

We will continue to provide close and timely coverage of the bill, so please feel free to do any or all of the following:

If you have any questions, please feel free to share them with us via email.  Also, you may wish to contact your local state senator or representative if you would like them to take a position.