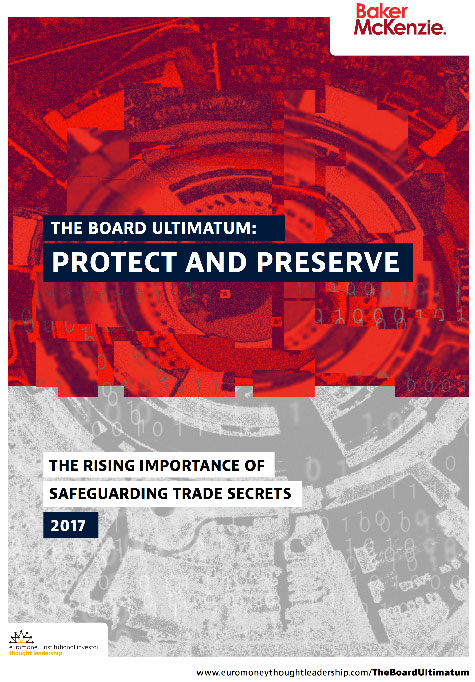 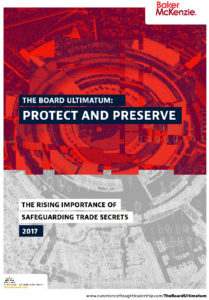 Two important reports on trade secrets protection were recently issued: one by Baker McKenzie and Euromoney Institutional Investor Thought Leadership and the other by the Office of the Intellectual Property Enforcement Coordinator (IPEC).

Issued in June, the Baker McKenzie and Euromoney Institutional Investor Thought Leadership report “look[ed] at the rising importance of safeguarding trade secrets during a time of swift technological advancement.”

The two firms surveyed over 400 senior executives across 5 industries and reported the results in a new report called, “The Board Ultimatum: Protect and Preserve.”

The report is available here.

As IPEC Daniel Marti summarized it,

The Strategic Plan has been prepared to go beyond a compilation of abstract goals or objectives, placing heightened importance on the need for a detailed assessment of the challenges faced by creative, innovative, and law enforcement communities, domestically and overseas, with respect to IPR enforcement. By adding increased attention on the speci c dimensions of the evolving IP enforcement challenges before us, we may better advance the development of narrowly-tailored, but strategically-aligned, solutions in the months and years to come. As such, this Strategic Plan represents the beginning of a continuous process, and not the culmination of one.

This Strategic Plan represents a “call for action” for all nations—as well as international organizations, industry, educational institutions, and consumer protection and public interest groups—to provide forward-thinking leadership and a collaborative approach to combatting illicit IP-based activities. Together, we can enhance our enforcement programs and policies for the modern era, and ensure that collective efforts to curb illicit trade in counterfeit and pirated goods, online commercial piracy, trade secret theft, and other acts of IP infringement are maintained as a top priority.

The Strategic Plan is available here.

For some good background reading, take a look at the Congressional Research Service’s “Protection of Trade Secrets: Overview of Current Law and Legislation,” issued on April 22, 2016 – just before the Defend Trade Secrets Act was signed into law.