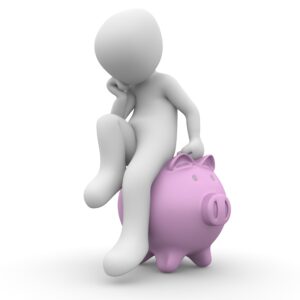 As explained in a prior post, Oregon was the first state to expressly ban noncompetes for low-wage workers. That happened in 2008 and was based on the median family income for a four-person family.

But Oregon was just the first. Nine other states have since followed suit. And now Oregon has even upped its threshold, effective 2022.

By way of background, in 2009, Massachusetts embarked on what would turn out to be a decade-long process to modify its noncompete laws, including imposition of a wage threshold, taking Oregon’s lead. Other states took note and watched on as Massachusetts shifted back and forth on what threshold would be used, ultimately landing on the employee’s status as nonexempt under the Fair Labor Standards Act, 29 U.S.C. §§ 201–19.

Then, in 2016, the Obama Administration issued a Call to Action, suggesting that states consider amending their noncompete laws to follow suit and ban noncompetes for “workers under a certain wage threshold . . . .” The thresholds were not defined, but instead, left to the states to decide.

The criteria for who qualifies as a low-wage worker varies by state. The standards for each are in the chart below. (Note that the specific dollar values may be subject to increase for inflation or otherwise.) 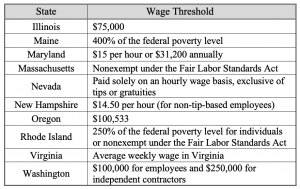 As indicated above, while Massachusetts and Rhode Island have based their criteria on the Fair Labor Standards Act (which has minimum dollar criteria coupled with job duty criteria), the other states have used a minimum dollar threshold of some type, with the exception of Nevada, which has used a method of compensation as the standard.

Given that the federal government is considering noncompete legislation (see President-elect Biden’s plans and prior Congressional and regulatory efforts) and many other states are considering modifying their noncompete laws, perhaps a uniform standard will emerge over time. Of course, to the extent based on dollar thresholds, it bears noting that different dollar thresholds can have significantly different implications in different locations, depending on the region’s prevailing cost of living and median income.

We will continue to keep you posted if and as things develop.

[1] Technically, Illinois passed the low-wage employee ban as the Call to Action was being worked on. (Illinios had a representative at the table for those discussions.)