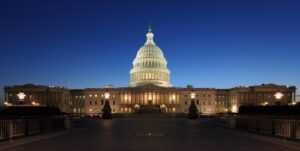 With all of the changes at the state level (45 bills in 21 states, plus D.C.’s near-total ban, which is, as of yesterday, now officially adopted and pending funding, likely in the fall, it seems), the federal efforts — spearheaded by Senator Chris Murphy — continue to inch forward.

During the Senate the confirmation hearing of Julie Su (currently the Secretary of the California Labor and Workforce Development Agency) for the position the Deputy Labor Secretary, Senator Chris Murphy reminds us that his bill to ban noncompetes is still in the works — and that, ultimately, he expects the FTC to regulate noncompetes.

The exchange (available here) was as follows:

Senator Murphy: “I wanted to stay on the topic of your service in California, but on a different subject, and that is a law that California has had on the books for a while, effectively banning the use of something called noncompete agreements. Noncompete agreements cover today about 20 percent of U.S. employees. They impact low-skilled and low-wage workers, just as they impact higher-skill and higher-wage workers. And, they are inherently noncompetitive. They effectively give employers a veto right over employees’ right to choose where they work. This is becoming a real area of bipartisan agreement. We have legislation modeled after California’s in Congress now that’s supposed by a bipartisan coalition of Senators. While this probably an issue that will be more likely regulated by the FTC than Labor, the Department of Labor still has the ability to glean information about the impact of noncompetes. President Biden ran on a promise to address this issue. So, I wanted to ask you about what your experience is in California with a fairly rigorous restriction on noncompete agreements and whether you’d be willing to work with the Committee and with the Senate to at least make sure that the DOL provides relevant information to help us make a decision moving forward on this issue.”

Secretary Su: “Yes, thank you so much Senator. So, absolutely yes to working together on this issue if I’m confirmed. I think is one of those examples of how something that’s good for workers is actually also good for employers. The ability for employers to attract and train the talent that they need. I think it’s just a very important part of — again the many areas of common ground, that when we do something that protects workers, there’s also a benefit to employers. So absolutely yes to working on the issue together.”

Senator Murphy: “And my sense is that in California you found that the existing protections for intellectual property and trade secrets is sufficient in order to make sure that employees who are leaving one firm that’s highly dependent on IP doesn’t take it and bring it illegally to another company. It’s important for folks to remember that just because the noncompete agreement may not be available to an employer, they aren’t bereft of other mechanisms to stop the illegal transfer of intellectual property. Is that correct?”