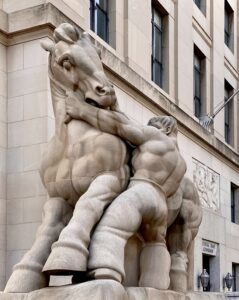 Contracts containing restrictive covenants (noncompetes, nonsolicitation agreements, and the like) have been the province of state regulation for over 200 years. However, starting in 2015, the federal government has been stepping into the breach through proposed legislation (most recently two bills to ban all employee noncompetes and one to amend the FLSA to ban noncompetes for nonexempt workers), FTC review (starting with a workshop in January 2020), and an Executive Order (on July 9, 2021) “encouraging” the FTC to “curtail the unfair use of non-compete clauses . . . .”

None of that is news.

But, what is news is that earlier this week (September 14, 2021), the FTC issued a public statement that — if it is as broad as it appears — seems to presume that the FTC has authority to regulate these types of contracts.

Though not specifying noncompetes or other restrictive covenants, the FTC voted 3:2 to authorize “new compulsory process resolutions” (essentially allowing for a streamlined process to demand documents and materials from companies and others) in eight “essential areas,” including the “abuse of intellectual property” and “monopolistic practices.”

Putting aside the procedural issues about compulsory process (about which I offer no comment), these two “essential areas” at least raise the specter of FTC regulation of noncompetes — especially when viewed in context of the FTC’s 2020 workshop and President Biden’s Executive Order.

With regard to intellectual property, the press release provides:

Noncompetes are a key tool to protect trade secrets (a type of intellectual property). Accordingly, the statement may signal the possible regulation of noncompetes on this basis.

Similarly, the “monopolistic practices” area may do the same. Specifically, the press release states as follows:

“Monopolistic Practices: Market power abuses by tech companies and other large companies are rightly a source of bipartisan concern. This omnibus will allow staff to more expeditiously investigate market power abuses by dominant firms that are precluding businesses and entrepreneurs from being able to compete, particularly in digital markets.”

FTC Chair Khan and Commissioner Rebecca Slaughter note in a public statement that “[s]mall businesses—including franchisees and start-ups—routinely report how market power abuses by dominant firms preclude them from being able to compete.” While this comment appears in context to focus on things other than noncompetes, it has nevertheless been a theme in the discussions about noncompetes and no-poach agreements. And it also comes at a time when the FTC is focused on regulating noncompetes in the context of mergers and acquisitions (albeit because of the nature of M&A transactions, not noncompetes per se).

So, am I reading too much into it? I don’t know, but I don’t think so. Time will tell.