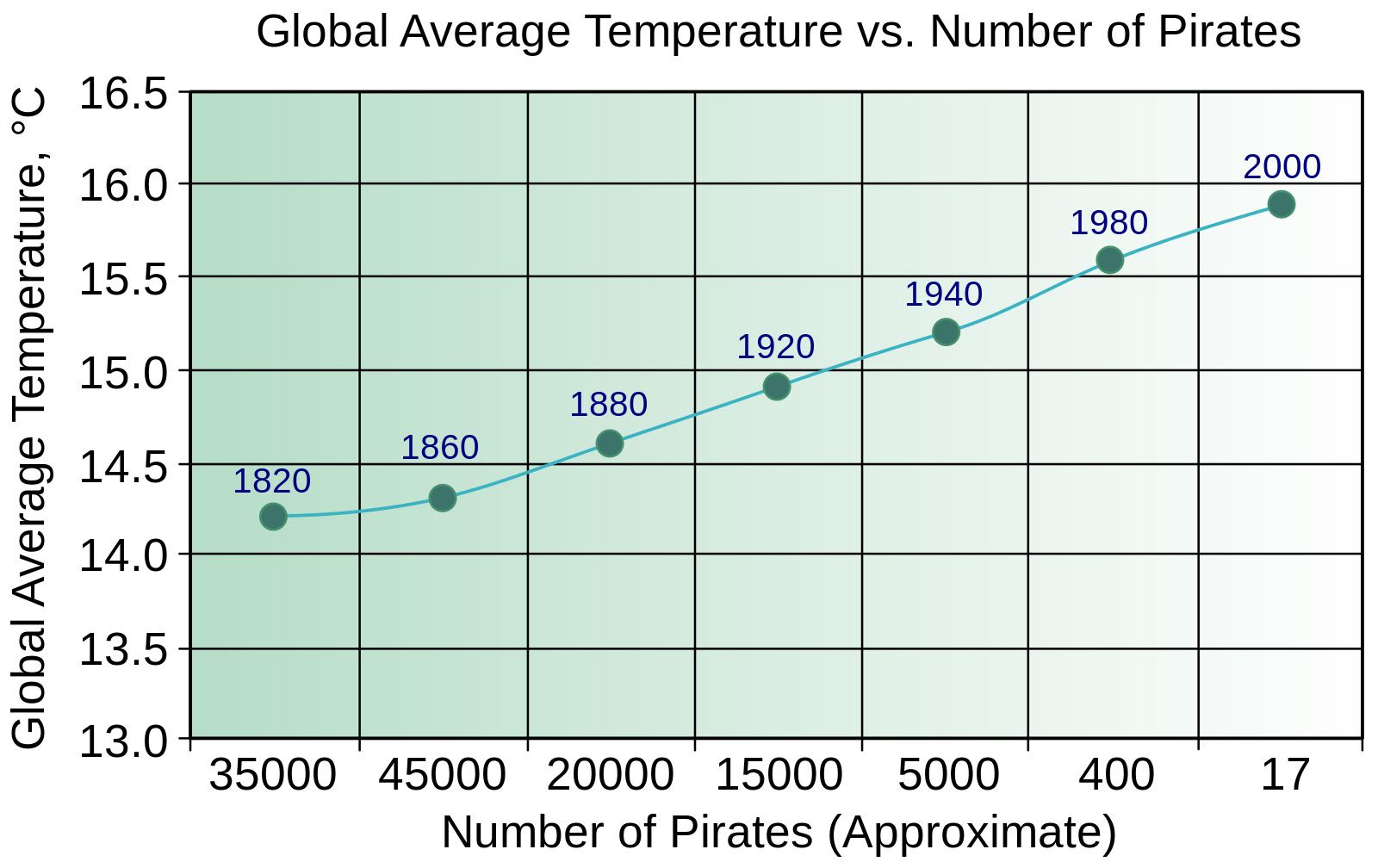 If it’s not evident from the set up, this assumption is wrong for multiple reasons. Indeed, as my partner, Steve Riden, has observed in jest: “By the same logic, the Boston biotech market (which has brought you, among other innovations, prevention against covid!) owes its very existence to noncompete agreements.”

If you’re interested in more discussion about the Silicon Valley fallacy, I wrote an article (behind a paywall) and blog post in which I tried to provide some history to the roots of the misconception and show that it’s one of the most common and harmful instances of the fallacy that correlation implies causation — second only to the belief (as demonstrated by the chart above) that global climate change is caused by the decreasing number of pirates.

So why am I raising this again now?

Because the myth persists, is repeated as part of a broader, misplaced justification for banning noncompetes, and appears to be influencing some of the legislative and regulatory dialogue and activity considering limitations on the use of noncompetes.

While the goals of reevaluating noncompete laws are certainly reasonable, if not laudable, the unintended consequences can be devastating if large-scale changes are based on mistaken foundational assumptions and incorrect, incomplete, and often conflicting information and research.

To be clear, I have no objection to — and to the contrary, I encourage — an honest debate about the pros, cons, and necessity of noncompetes. Indeed, a recent article in Slate.com by Timothy Lee raises (in my opinion) balanced concerns about the use of noncompetes for low-wage workers (among others). In the article, Mr. Lee specifically acknowledges that “[t]he case for enforcing noncompete laws is strongest for” “executives, engineers, and others who have access to sensitive technical or strategic information.” Unfortunately, even in this thoughtful discussion, Mr. Lee finds support for his position (in part) in the Silicon Valley fallacy. (Maybe his opinion isn’t influenced by the argument, but the opinions of others, including legislators and regulators, might be.)

To further clarify my position, I also don’t object to calls for a ban of noncompetes based on a visceral (though understandable) animus toward them. (I’m not a fan of noncompetes either — but, after nearly three decades of first-hand, practical experience in the area of trade secret and restrictive covenant litigation and counseling, I recognized that they are often a necessary tool and believe that the abuses can be fixed with a few modest changes to the law, which have been suggested here.)

So, lest there be any question about my complaint: I object only to propping up a position with inaccurate, incorrect, misleading, pretextual, or misplaced justifications, and to proffered rationales that are grounded on a noncritical acceptance of (false) soundbites or the perpetuation of the repetition fallacy, i.e., incorrect assertions that are repeated so often that people come to believe them to be true.

For example, a recent New York Daily News OpEd — by someone who has run and will likely run again for political office — evidences part of the broader problem.

The OpEd is one that reflects a clear antipathy to noncompetes. To reiterate: There is nothing wrong with voicing an opinion; that’s a good thing. The problem, however, is that the author’s arguments suggest a misunderstanding of the difference between noncompetes and other restrictive covenants and draw support from significant misinformation.

In that regard, the OpEd focuses on Omnicon’s use not of a noncompete, but rather on what appears (based on the OpEd’s description) to be a no-recruit agreement (a prohibition on soliciting former colleagues) and a no-service agreement, which is typically used to prevent a former employee from soliciting customers (that the employee was paid to develop relationships with on behalf of their employer) or to prevent disintermediation (i.e., where a client receives services from a company, and then cuts out the company by taking the employees who had been providing the service, effectively making the company an unpaid staffing firm). Those are different types of restrictive covenants, involving different considerations.

The author of the OpEd also engages in sweeping hyperbole condemning noncompetes, eliding the inaccuracy of the assumptions on which the arguments are based. For example, she wrote, “noncompetes are just a paper form of employer theft . . . . They allow employers to keep wages low because they can threaten to sue if a worker leaves.” These comments certainly sound persuasive, and if they were true, they would certainly compel quick and decisive reform. But, they’re not true, at least not as stated.

First, noncompetes are contracts and, as such, must be supported by consideration — something of value, a bargained-for exchange. As such, they are not a “paper form of employer theft”; they are an exchange. This very point was recently addressed in The Ethics of Noncompete Clauses, by University of Georgia Professor Harrison Frye.

Similarly, the comment about employers using noncompetes to keep wages low, not only baselessly ascribes Machiavellian-level malevolence to employers, but it’s factually inaccurate. While most of the studies are focused on low-wage workers, other research suggests that higher-level employees (CEOs, Vice Presidents, and directors, among others) earn more money when they are bound by noncompetes than their peers who are not. Further, one well-regarded study shows that when an employee is given advance notice that a noncompete will be required, there tends to be a wage premium and other positive benefits compared to people who do not have noncompetes.* For more, see 15 Common Myths About Noncompetes Debunked, Myth #5 (Noncompetes depress wages).

Another common mistaken assumption built into the OpEd is that noncompetes have “crept into the workplace very quickly. A decade ago, fewer than 20 million workers were subject to them; now it is likely that more than 60 million workers, or between 30-50% of the private sector.” Putting aside that noncompetes have been used in the United States for over 200 years (including for salesmen, delivery drivers, and shipping clerks since at least the early 1900s, and indeed, have been around since the Middle Ages), we simply don’t have data to support either that they “crept into the workplace very quickly” or that they are being used with increased frequently. In short, the throw-away assertion of sudden, increased use of noncompetes — one repeated way too often — is very likely wrong.

Here’s the problem: The data relied upon is flawed and cherry picked, yet perpetuated without analysis.

Specifically, OpEd cites an article that in turn relies on a survey that shows a range (as of 2017) of “somewhere between 27.8% and 46.5% of private-sector workers are subject to noncompetes,” i.e., a range that does not speak to a change in use, but merely highlights the imprecision of the result. Nevertheless, to make the point that this result reflects an increase in noncompete use, the article then compares that result to an earlier survey suggesting that about 18.1% of workers were bound by a noncompete in 2014. Based on the comparison, the article concludes that the different outcomes “suggest that the use of noncompetes is growing.”

When read closely, the difference in survey results appears more likely to reflect the difference in, and quality of, the survey methods, as opposed to a sudden, nationwide, dramatic shift in how companies use noncompetes. Think Occam’s Razor. Indeed, the article even recognizes that the two surveys employed very different methods and had different potential defects.

To that point, a very recent analysis by Ryan Nunn, Katherine Lim, and Tyler Boesch of the Minneapolis Federal Reserve highlights the problem with comparing the two different methodologies and, if anything, suggests that there has been no growth, and even a slight dip, in the use of noncompetes. Specifically, based on data from 2017-2018, the Federal Reserve analysis concludes that only one in seven (roughly 15 percent, according to the study) of employees have a noncompete in the current or prior job. This result is obviously more aligned with the earlier 18.1% result, thus calling into question the dubious jump to the 27.8% to 46.5% estimate for that later timeframe.

To dig a bit deeper, Mr. Lee’s article references this Minneapolis Federal Reserve study and contends that the “topline 15 percent figure likely understates how widely noncompete clauses are used in the labor market” because it’s based on employee responses and employees “don’t always read their contracts carefully or remember what they’ve signed.” This speculation about what employees may remember is probably right. But, in my experience, while people do in fact sometimes forget that they signed a noncompete, they also frequently mistakenly believe that they did sign a noncompete, even when they signed only some other type of restrictive covenant (like a nonsolicitation agreement). Further, if the 15 percent is an underestimate, the same criticism would necessarily apply to the 18.1% 2014 baseline estimate. Accordingly, both estimates are either accurate, understated, or overstated. Whichever it is, two studies together seem to suggest only that companies have not materially changed their use of noncompetes — a result consistent with a leveling off of noncompete decisions, also suggesting that companies are no more reliant on noncompetes now than they were a decade ago (a period encompassing the supposed 2014-to-2017 spike in use).

Suffice it to say that I am constantly on the lookout for research on noncompetes, and have never seen proper support for the suggestion that there is an actual increase in use of noncompetes. The closest is a study showing that noncompetes were increasingly used for CEOs from 1992 to 2014 (the period for which there was data). For more, see 15 Common Myths About Noncompetes Debunked, Myth #4 (Noncompetes are being used and enforced with increasing frequency).

It also bears noting that people often look at studies about the theoretical impacts of noncompetes on low-wage workers to justify a ban of noncompetes on all workers, regardless of the workers’ positions or industries. However, those studies are limited in their application. And, to the contrary, as noted above, other studies show that noncompetes can have positive wage effects both for CEOs, Vice Presidents, and directors, and people who have received advance notice that a noncompete would be required.

Not to bury the lead, but also critically important, the burgeoning research that has examined noncompetes are now being called into question by recent research by Professors Natarajan Balasubramanian, Evan Starr, and Shotaro Yamaguchi. Specifically, in their recent paper, Bundling Postemployment Restrictive Covenants: When, Why, and How It Matters, the professors observed that because companies “bundle” multiple restrictive covenants, it seems that the results of the prior studies, which focus on just noncompetes, turn out to be potentially “misleading” and “need to [be] carefully reconsider[ed].” Further, addressing the correlation-implies-causation fallacy, the professors acknowledge that they cannot assess all of the variables at play, and therefore need to “refrain from making any strong causal claims.”

Coming back to the main point, the bottomline is that we’re seeing too much misinformation out that there is threatening to lead to poor policy decisions that can have seriously adverse impacts on the economy.

My request: Please just report accurately, and let’s have an honest discussion. It takes time to do the homework, but it’s the obligation of anyone making or influencing political policy.