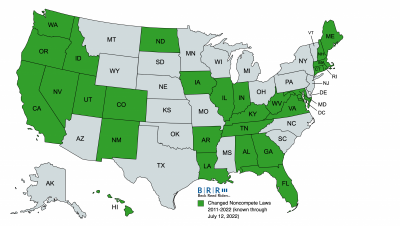 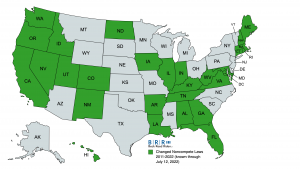 In three of those states, the law changed twice.

And, in D.C., it’s not even clear when or how the anticipated change will work — assuming all goes as planned, the new D.C. noncompete law will “take effect” on November 10, 2022, though supposedly, it will apply as of October 1, 2022.

Of the eight new noncompete laws this year, the most dramatic were in Colorado, D.C., and Illinois, each of which made sweeping changes. Colorado arguably expanded the scope of potential criminal liability for the misuse of noncompetes, only to later all but eliminate the risk entirely, while completely revamping its law. And D.C. reversed course on a planned ban on virtually all noncompetes, only to set a wage threshold (like various states have recently done) below which noncompetes cannot be used.

Less significant changes — unless, of course, you’re the one affected — were made in Illinois (separate from the broad changes), Iowa, and Kentucky (which made two separate changes).

Then, of course, there’s Oregon, which is on it’s fourth change in six years, this time establishing a new low-wage threshold, making agreements that violate the statute void (instead of voidable), and shortening the maximum duration of a post-employment noncompete to one year.

And, those were all just this year alone. In total, there have been 42 changes in 28 states plus D.C. (34 additional changes in 23 other states) in the last decade or so.

While many of those changes established wage thresholds and other compensation criteria, others imposed requirements concerning what notice an employer must provide about noncompetes, and many others were either much more narrow or more broad.

While the state (and D.C.) legislatures have been — and are likely to continue to be — active, the courts are also making broad-reaching changes. The most recent was in Hawai‘i, which had followed on the heels of the Wyoming Supreme Court’s decision changing Wyoming from a state allowing courts to modify overly-broad restrictive covenants (often called the “reformation” approach) to one that does not (the so-called “red-pencil” approach).

Knowing the noncompete — and related trade secret — laws across 50 states, plus D.C., is no easy task. And keeping track of the flood of changes in recent years makes it even more difficult. Unfortunately, it’s not something you can ignore.

Because of this, my firm (Beck Reed Riden LLP) and I created several resources to make the task easier.

Those resources are as follows:

About 12 years ago, I created the first-of-its-kind survey chart of the noncompete laws in all 50 states (plus D.C.). Since then, both the White House and the United States Department of the Treasury have relied on it, as have the New York Times, The Wall Street Journal, academic researchers, lawyers (both outside lawyers and in-house counsel), and many others.

The chart covers the following:

The chart is updated regularly as the laws change. Each update is described in a blog post as it is released. But, the most current version is always available for download here.

That 50-State Trade Secret Chart is available for download here.

In addition to the charts, several years ago, we created a dedicated page on our blog (FairCompetitionLaw.com) providing a place to find the myriad changes. Recently, we overhauled the page to make it more readable and useful.

The “Changing Trade Secrets | Noncompete Laws” page now provides a detailed summary of the changing landscape of trade secret laws and noncompete laws around the country, state by state and at the federal level. As to the latter, although Congress and the FTC have been considering imposing federal regulation of noncompetes for the first time in over 200 years, it has not yet happened. That said, it is looking increasingly likely that the FTC will attempt to regulate noncompetes, likely banning their use for low-wage workers and requiring some type of advance notice. We shall see.

Please note that the Changing Trade Secrets | Noncompete Laws page will (as has been done in the past) be updated on an ongoing basis as the laws change.

We hope you find all of these resources useful.

And please note that we are grateful for all of the input we’ve received over the years, and welcome any suggestions for improvements you may be willing to share.